“The Eternal Trek of Jewish history” 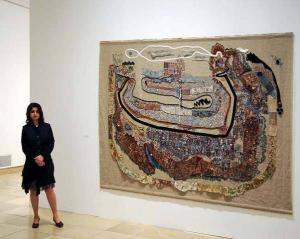 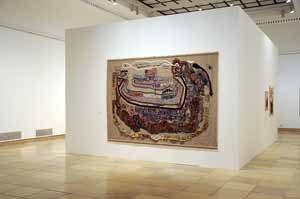 “The eternal Trek of Jewish History”

Family car: Memories of the grandparents and the childhood of the artist in Odessa. Writing on Wheels: Cities in Eastern Europe. The motifs of the Garden of Eden (upper left) are repeated in the desired home (worldly arrival).
Middle of the picture, above: Names of important personalities of world culture. Black leather strips – prayer belts Tefillin. The motifs of the Garden of Eden repeat themselves in the desired home in the middle (spiritual arrival). The circle closes.

“The Eternal Trek of Jewish History”

The exploration of one’s own identity is a fundamental theme of art history, which is becoming increasingly important in a society shaped by the concept of globalisation. The consciousness of belonging to a cultural circle, which can look back on a history of over 3,000 years full of splendour and misery, hope and despair, has a connecting and identitätstiftend.

The collage “The Eternal Trek of Jewish History” is the attempt to transfer this story in its entirety into an individual visual language. In densely consecutive scenic representations, the large-format collage shows significant stages of Jewish history from its origins to the present day, from dispersal into the diaspora to the 21st century. Century. Kaleidoscope are cited as key scenes from historical events, rites and customs and interpreted artistically in the style of the individual epochs.

Names and portraits of important personalities of the world culture of art, music, literature, philosophy and religion, economy and technology merge into large-scale image units, which the viewer experiences as an abstract form play – or as an informative Image text flow can be decrypted.

Quotations, illustrations and interpretations are combined by the sensitive use of the different stylistic elements and the use of different but precisely coordinated and complementary abstraction levels to a large, Narrative-aesthetic unity, which, despite the immense dynamics of the historical events presented and the enormous density of facts and figures, conveys a concentrated formal unity and a consistent continuity of Jewish history.

The basis of the collage is coarse linen fabric as a symbol for the creation of the world. Fabric or Leather strips guide and accompany the gaze of the observer through the pictorial and pictorial episodes of Jewish history and are structured in such a way that they consciously or unconsciously remind of religious symbols. Red or Terrakottafarbene Leather strips symbolise the historical habitat of the Sinai desert, the black Tallit and the prayer belt Tefillin. The knotted cords in the middle of the film quote the threads of the prayer mantle. They illustrate the unity of the Jewish people and recall with their knots the five books of Moses.

Floral, stitched jacquard fabric strips are emblematic of the mundane everyday business, while the geometrical patterns are reminiscent of Judaism, which preserving the spiritual and the traditions. The floral jacquard fabric, whose pattern is inspired by the idea of the “Garden of Eden” (upper left) as a symbol of a fulfilled religious life, is repeated motivically in the dream of the longed-for earthly home (upper right) and the place of spiritual arrival (middle). The yearning for a home that continually moves through the entire history of the people of Israel is central to the collage and symbolizes both the beginning and the end of the earthly journey, as well as the aspect of infinity.

Here the circle closes and the viewer’s gaze is directed towards the overall conception. In small episodes, the collage tells details of the diverse history, but does not lose sight of the big picture. The overall composition reminds us of Noah’s Ark in its form. “The eternal Procession of Jewish history” becomes a ship in motion, which, starting from the Garden of Eden, runs forever in search of the new home the oceans.

The viewer can delve into the artistic dense artistic portrayal and rich in content, and in the precise picture montages of various historical events, which are fluently complementary to a logically intertwining narrative, Lose. The technique of the material collage, with its play of coarse and fine, harmonious and destroyed structures, emphasizes, however, the materiality and thus the reality of the work vividly and leads both the collective fate of the Jewish people within the Great world events, as well as the significance and importance of the individual members of the religious community.

The eternal trek of Jewish history

The exploration of one’s own identity is a fundamental subject of art history, which in a society that is shaped by the idea of globalization is constantly gaining importance. The awareness of being part of a cultural group that can look back on a history of over 3.000 years has a connecting effect and confirms one’s identity.

The collage “The eternal trek of Jewish history” attempts to translate this history into its entirety into an individual visual language. The large-sized textile collage shows important milestones of Jewish history from its beginning until today, from its dispersion in the diaspora up to the 21st century. Key moments from historic incidents, from rites and traditions are cited kaleidoscopically and interpreted artistically in the style of the individual epochs.

Names and portraits of important figures of our global culture from the arts, music, literature, philosophy and religion, the sciences and technology are fused to extensive image-units that can be experienced as abstract play of forms – or can be deciphered as informative flow of image and text.

Quotations, illustrations and interpretations conjoin through the sensitive employment of various elements of style and by using different levels of abstraction, which are precisely harmonized and complement each other to form a great narrative-aesthetical unity, which manages to purvey a concentrated formal consolidation and consistent continuity of Jewish history.

The base of the collage is a coarse linen fabric as symbol for the formation of the world. Fabric or leather strips guide and accompany the observer’s glance through the graphic-pictorially illustrated episodes of Jewish history and are organized in such a way that they consciously or subconsciously remind of religious symbols. Leather strips in red or terracotta symbolize the historic habitat of the Sinai Desert, those in black symbolize the tallit and the tefelin. The knotted cords in the middle of the work quote the fringes of the prayer robe. They represent the unity of the Jewish people and the five knots remind us of the five books of Moses.

Flowered strips of jacquard fabric, which have been sewn together, symbolize the mundane business of everyday life, while those with geometrical patterns recall spiritual Judaism, preserving and teaching traditions. The motif of the flowered jacquard fabric, whose pattern is inspired by the idea of the Garden Eden (top left) as allegory for a fulfilling religious life, is repeated in the dream of the desired earthly home (top right) and in the place of spiritual advent (middle). The longing for a home, which is present throughout the entire history of the people of Israel, is central for the collage and symbolizes the beginning as well as the end of the earthly journey, but also the aspect of infinity.

Here we come full circle and the viewer’s gaze is directed towards the general concept. In short individual episodes, the collage narrates details of the manifold history without ever letting out of sight the big overall picture. The general composition of the collage seems to take the shape of Noah’s Ark. Thus “The Eternal Train of Jewish History” turns into a ship in movement, which, starting from the Garden Eden, eternally sails the seas and oceans in search for the new home.

The observer may delve deeply into the visually dense artistic description, which is rich in experiences and content and become lost in the precise montage of images from a multiplicity of historic incidents that complement one another to a logical interlocking narration. The technique of the material collage, though, with its play of coarse and fine, harmonious and destroyed structures, graphically emphasizes the work’s materiality and thereby its relation to reality, demonstrating impressively the collective fate of the Jewish people within the bigger context of world history, as well as the importance and meaning of the individual members of the Jewish community.